I did have serious thoughts about bailing out on a ride today. The nice ladies on the breakfast news weather were predicting something biblical and it was raining. I took the hound out to count squirrels and check out the weather conditions which to be honest weren't too bad, a bit breezy but the sun was out. There was even a rainbow over where I was going to go so it had to be ok, there might a crock of gold or a Trek Domane :)

So after taking to twitter for a bit more motivation I decided to get ready and layer up, time to try out my legwarmers which I've not worn yet. I stuffed my waterproof in the back pocket for good measure just in case the rain turned up. I didn't want to venture too far as 'er indoors was a bit worried about me out in the elements so I decided to head for the Toll road. The usual drag along the straight didn't feel such a drag today and I quickly caught up a fully laden cycling tourist who gave me a cheery bonjour, I think he could of been French. Bumpy ride through Porlock as the road is being resurfaced, old stuff taken off but no new new stuff yet.

I really enjoy riding the toll road, it's only a twenty minute ride away and gives you a good work out with the added bonus of it being quiet traffic wise and scenic to boot. I also need to get some practice in as the ACG are threatening to visit and they are a bit quicker than me. It was particularly beautiful this morning with the sun breaking through the trees burning away the moisture which was rising into the air. I tried taking some pics with the phone but I don't think it does the moment justice. 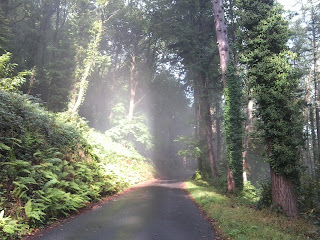 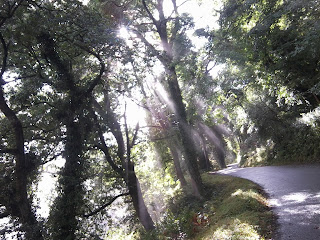 Once out of the tree line the wind smacked me right in the face but I was feeling good and kept spinning. It was very windy and very dark at the top of the toll and I hadn't really brought provisions to cycle much further so put on the waterproof and headed straight back down. I passed the possible french tourist again as I headed down who will no doubt regale stories to his daughter about climbing the route a peage Porlock on his fully laden touring bike.

Back to town and a quick lap around the town and the seafront which was very busy with Grockles so caution was needed as they seem to have left their common sense at home. It was getting gloomy as I got home and just as I got in the rain came, not bad timing at all.

Quickest time up the toll road, I did feel good on the bike today and was so glad I went out.
Posted by Chunky Mamil at 14:15