I set off on a bit of a challenge today, probably comparable to climbing Everest or the north face of the Eiger, I was going to attempt the hard way up Dunkery Beacon. Why I hear you ask, why not, if you don't try you'll never know will you, that and the Mendip Rouleur told me to, sort of. First of all I had to negotiate Crook Horn Hill which in itself is quite a challenge for me but which I've ridden before. My lungs were screaming after dragging myself up that little beauty but that was just the start. After attempting to catch my breath I set off up the road to Dunkery, its very steep, I think I read somewhere its 17% most of the way. I didn't get very far, lungs, gears, me, name the excuse, it was just too steep.

I tried doing it in sections until I got nearer the top were my lungs and legs waved their little white flag and I walked about 20 yards until the gradient lessened. It was a beautiful day for a walk though, warm and sunny and lots of other people were out walking but none of them pushing bikes.

Well that's that one not done but at least I know how far I can get before I fall off. Perhaps I should try it again next week if I can find someone daft enough to join me. It was a nice change to be riding down the way I normally ride up offering different views down the hill and up to the beacon. I stopped to take a pic of the tree which stands alone at the top of the road. Its a bit of reference point for me, top of the road, turn right and there's a cracking offroad downhill. You can also tell the which way the winds generally blows around here to. 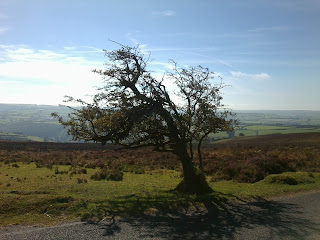 I decided to ride to Winsford which meant another climb from Luckwell Bridge but this one was a bit steadier. I always enjoy the ride to Winsford, you can get the big gears going as you head down the valley. It got a bit rough towards the village as the road had been dressed with gravel and all I could think about was punctures but thankfully the puncture fairy stayed away. I stopped for a change in Winsford, no bus shelter but a nice bench in the sun next to the war memorial.

Back up the hill to Wheddon Cross, time to stop for something fizzy and decide which way to go. Ten mile downhill back to home or back over Dunkery. It was sunny, Dunkery again, why not, at least I know I can ride it this way. Lots of people about this time, some kind of walking, team building type thing going on. Lots seemed to be wearing laurel wreaths on their heads but I don't think any of them were Romans or ancient Greeks ? Back down what I'd attempted to ride up earlier, far more pleasant, back to the main road and the last hilly bit before the straight and back home.

I feel like I'm getting slower but have I plateaued ? Will put it to the test next weekend when I ride the Cheddar Cyclosportive which was my first road event last year.
Posted by Chunky Mamil at 20:01