6.00am it's dark and I can hear the rain on the conservatory roof which makes it sound ten times worse. Should I go back to bed, I slept well and the bed was lovely and warm or should I cycle around Exmoor in the rain with 1600 others ? Who talked me into this ? It must have been me having a momentary lack of sanity or that's what it felt like as I headed out into the dark and neon lights. Handy that it's just a five minute spin to the start for me with the event being held at Butlins once again. Lots of cars were still arriving loaded with bikes but I had the luxury of registering yesterday so just waited the ten minutes or so to start. Marcus who organises the event did the usual safety brief but emphasised the be safe on descent bit after having a very serious accident on the Beast's sister event the Beauty back in April.

7.00am and off I went, determined to take it steady and not get swept up in the testosterone which is usually flying around at these events. Around town and the drag to Luccombe and the first big climb of the day up the hill towards Dunkery. I had to de-layer a bit as I was a bit hot, it was raining but not particularly cold and I would no doubt get a bit warmer dragging myself up this beauty. The promised matting on the cattle grid was there but sadly it wasn't doing the job. I think the bit they had was too small and kept slipping, just as I approached there was a three man tangle in front of me as they crossed. No one hurt thankfully and all taken in good humour which was nice to see. I tried riding up and was passed by people walking so joined in the traipse up for a bit but got back on.  Down to the ford at Cloutsham were I also joined the masses by doing the cyclo-cross bit around it rather than through it and said hello to the nice man from Sportive Photo. The long drag up onto the moors now, a steady line of fluorescent jackets and flashing rear lights stretched into the distance in front of me, it looked quite cool, should of took a picture! Once on top it was wet and windy but had the chance to turn some bigger gears as the route took me back towards Porlock. This was probably the worst bit for me, driving wind and rain, I've never ridden this far west before and it took a bit longer than I thought it would. The descent to Lynmouth wasn't has bad as I thought it would be but I had a twitchy bum moment near the bottom when I felt my rear slip a little on a drain cover.

Lynmouth and the first feed stop and it was very busy, you got a bag with a bit of flapjack, malt loaf and a banana and soup was available but there was a bit of a queue. I started getting a bit cold as I refuelled, I'd left my feet somewhere on the moors so made a quick exit for the climb up Watersmeet. This is my kind of climb, a nice gentle gradient, sheltered in the valley as it winds it's way up, pick a gear and spin, I'll have to come here again, when it's sunny. The road ramps up a bit when you turn up towards the moors but not for too long. Wet and windy again as the route headed over the moors but pretty flatish and some good downhills as you make your way to Simonsbath where the route splits, straight on or right for the hundred miler....er perhaps not, this year ;) Steady climb out of Simonsbath and and the chance to get the bigger gears turning as I made my way to Exford, nice and flat and sheltered but it was still raining. I stopped at my bus stop in Exford to put my buff and hat back on as I was starting to get a bit chilly and grab a snack. Up the hill and out and along to Wheddon Cross and up the last biggish hill of the day to the crossroads. The side of my right leg by my knee was starting to ache now, I think it was the cold, but it was downhill to the second feed stop now and a chance to rest it. Same fare again but I got some soup this time, the warm drink was really welcome, I think it was vegetable, well that's what it said on the box next to the containers. I spoke to a nice young man as I admired his Van Nicholas which he said was very nice to ride, I must start saving :) Should one covet another man's Van Nicholas ?

It was then a loop back up to the crossroads and the descent of the day down to Timberscombe which I've ridden before and pushed it a bit. I might of been going a little too quick but took it steady on the leafy bends but someone in front of me took a spill but he was OK. I found that if I pedalled quicker my leg hurt less ? So I pedalled as quick as I could onto Dunster and the last little climb which some missed but I didn't and back along the road to the finish at Butlins. An indoor finish and your name announced to make you feel special, a bottle of water, a glass tankard and a voucher for a free half. I had my half and toasted absent friends, I even saw one of my twitter followers and said hello and had a chat with the organiser about next years Beauty. There was quite a good atmosphere in the venue which was probably helped by the bar being open and there was lots of friends and families there greeting riders as they finished. 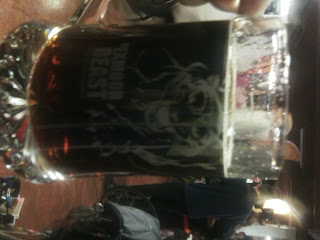 Strangely, I quite enjoyed it today, I took it steady the weather never helps but perhaps adds to the sense of achievement. It took me six hours and sixteen minutes in total, not quickest, not slowest hopefully but I rode with the attitude of not worrying about it which helped. Next Year ? hmmm....
Posted by Chunky Mamil at 16:20