I've been slacking off my road riding duties lately mainly due to hiding from the weather. I don't mind mountain biking when it's a bit crappy it's all part of the fun but I find road riding is no fun in the elements. That said it's the Exmoor Beast next week and the weather always seem to accompany it, perhaps I should do it on the mountain bike ? It was nice today though so I decided to put some miles in the legs in preparation for the Beast. I was planning to go to Lynmouth but 'er indoors didn't like the sound of that so I headed for the Toll road and made it up from there. I've also decided to treat my bike with some new tyres, Conti Gatorskin and I've changed to 25c ones to see if they make things more comfortable.

Quiet on the hill today I think I was passed by only one car but I felt like I was struggling a bit but dug in and spun up. I thought I'd avoid the easy way to Exford because that road is bad enough in the summer and I'd dread to think what it's like at the moment. So along the top on the grippy surface and the new tyres did seem to take a bit of the buzz away. 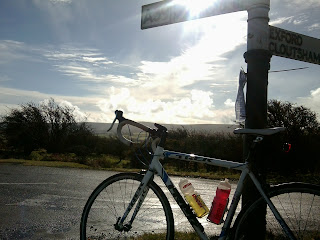 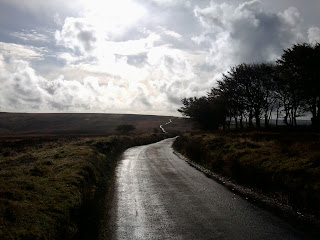 Along to Exford which is quite fun this way with a real steep kicker along the way and a fast descent down to the village and a quick breather at the bus stop. Up another hill out of the village, one I'll be repeating next week but I sat up and spun up and made my way to Wheddon Cross. A stop for something fizzy and decide which way to go which was a toss between down and home or up and another twenty miles. I need the miles so headed up, a climb I know I can do but I always find it a chore. I started to feel better and made quite good progress along the top deciding which way I could drop down. I thought I'd head for Elworthy which is great fun to go down and head back to home from there. 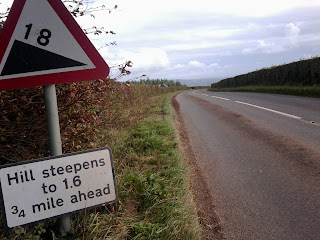 Not something I normally do but I headed for home along the A39 which thankfully was quiet today, I was a bit fed up of going up and fancied a bit of flat on the big ring.

I felt like I was struggling today and everything was hard work but looking at the stats I did quite well for me.  Perhaps it's a sign of my improving fitness ? Or perhaps when I feel it I must be trying ?

When I came out of the shop at Wheddon Cross this tune was blaring out of a car which provided me with the inspiration for the title.
Posted by Chunky Mamil at 16:44