...a punctured bicycle on a hillside desolate.....

Well it wasn't actually desolate but the bicycle was certainly punctured. A track I regularly take has obviously had a trim and as I descended I could see the thorns and was waiting for the inevitable. Both tyres, more than once, brilliant, I changed one tube and thought one was a slowy but in the end it was Shanks's pony home. A shame really because I'd been having such great fun splashing my way along the hills.

The day had started wet and grey so I waited and waited a bit more but in the end I thought just get on the bike and go. While I waited I took off my summer rear tyre and put on my chunkier tyre to give me some grip in the no doubt to be wet and slippery conditions. 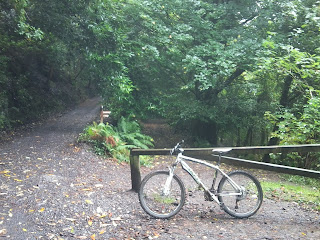 It was quite atmospheric as I rode up the hill, the mist was in the trees and it was just me, the squirrels, a deer and the odd Exmoor pony for company. Once on top of the hill the track turned into a river, I've ridden and walked up here for years but I don't think I've ever seen it so wet. 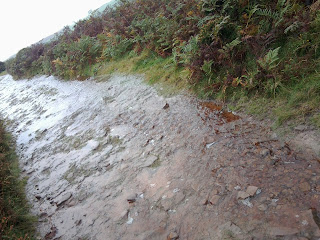 I was quite enjoying myself, it must be that childhood thing of getting wet and muddy and I also like the solitude even in the rain. The cloud had rolled in as I made my way up to Selworthy Beacon so the view was well er well there wasn't one. 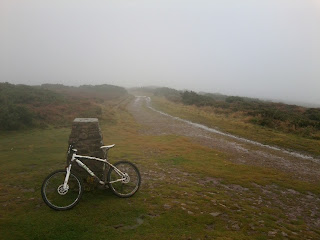 Five minutes and a great wet and rocky descent later the sun was out in Selworthy, weird or what ? Dunkery looked dark and moody in the distance though and the cloud was hanging on the hills. 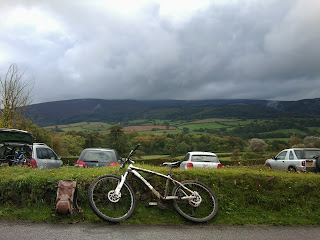 Along the back road with a plan of doing more miles but then I went down thorn alley and my ride ended. The endorphins I'd awoken had worked though and I quite enjoyed the stroll home, must of been the best part of two miles pushing a bike but it must of done me some good.