A short history of something....

Some of you may have already read the History of the Garmin Family on the notable blog of the Mendip Rouleur, if not please do. I thought it was about time I wrote about a little known branch of the Garmin family, that of the Exmoor Garmin's who once lived, loved and lost in this part of the world. Many stories are told of how this branch of family arrived in Exmoor but few facts are truly known. It is thought Ronald the brother of the flamboyant Jonny grew weary of his brothers excess so bought an estate from his distant cousin Bryton and moved to the rugged and bleak beauty of Exmoor to live a more rural life. Ronald had travelled, doing a grand tour and was particularly impressed by the mountains of the Alpine region. Being somewhat of a philanthropist Ronald soon built a chapel for the workers on his estate and ensured all the children received a basic education.


With the industrial revolution now taking hold and the advent of the internal combustion engine Ronald with the help of his only child Joshua ploughed the family fortune into building a road up the notorious Porlock Hill. Not only did this need to have a gentle gradient for the new fangled car but Ronald also wanted it to resemble the roads and tracks he had witnessed on his travels throughout Europe. The cost of such a big civil engineering project put a huge strain on the family finances and the health of Ronald who was now old and frail but determined to see his road built. The family estate was sold to a local consortium to help fund the project much to the disgust of the younger members of the family who saw their legacy disappearing into a hillside.


Sadly Ronald never saw his road finished which left Joshua to complete the project alone. Luckily Joshua had the business sense to charge a toll to use the road which managed to fund a simple existence for Joshua and his family living in the toll house collecting the tolls. Joshua grew weary of this simple life though and fell in with some poets who would visit the area to seek inspiration, drink and some would say take opium. His growing addiction estranged him from his family and they were forced to move to the poor house in nearby Williton as any takings from the road would fund his drink, drugs and fancy friends. Little is known of what become of Joshua, he was last seen on a starry night cycling up the toll road never to be seen again. The last known descendant of the Exmoor Garmin's is Jeremiah who is an old friend of mine, although getting on in years he still manages to accompany me on my cycle rides around Exmoor and sometimes further afield. 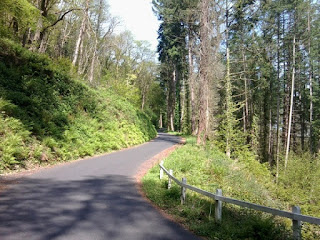 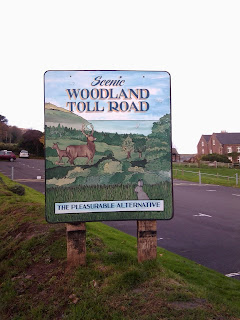 If you look closely at the sign you will see a train. It was Ronald's dying wish to have a alpine style railway also but sadly that dream never saw fruition.
Posted by Chunky Mamil at 21:15