A rare Sunday off so time for a rare ride with the club. Lots of riders turned up again the vast majority resplendent in their Minehead Cycling Club jerseys. It was nice to see some familiar faces and its great that I'm finally getting recognised now I've been out a couple of times. Everybody split up into their groups for the day, I tagged onto my usual bunch and we took the lumpy route to Porlock. We somehow met up with the fast group in Dunster and it was great to be spinning along in a group of about twenty all in the same jersey.

I've done an extra night shift this week so was feeling a bit tired (excuse No 78) but managed to keep up most of the time. We met up with the more gentile group who had beat us to the hotel for coffee. With it being the bank holiday a few had to get back home, including me as we were told we had other stuff to do, up and down the toll road was the agreed route. Legs were aching heading up the toll road but my average speed was looking awesome, then I realised I hadn't turned the garmin back on ! I just managed to stay in touch with Mike and Alison but they were chatting all the way so were probably cruising. We all met at the top and I headed down first but was soon passed by Brian, who I think is in his seventies and is as fast down as he is up ! A quick spin around the villages and back home in time to be told we wasn't going out anyway, oh well.....

Here's the strava bit minus the first two miles up the toll road but it makes the gradient look hardcore ;)
http://app.strava.com/rides/19774661

I rarely take any pictures when out with the club. I feel a bit awkward asking if people mind me taking pics, that and I'm usually puffing at the back struggling to keep up.

Off again next Sunday so hopefully I'm allowed to stay out and go for a longer ride. 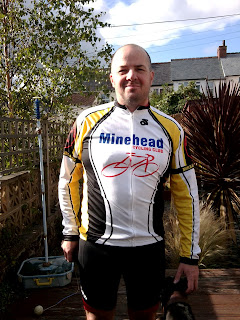