It must be the first Sunday in August because every first Sunday in August is Exmoor Explorer day. It has been for about the last twelve years or so. Its a kind of sportive for mountain bikers, twenty five miles for the saner ones and thirty five for those who ride too quick ;) Its a different route every year and this year the route was kept under wraps to add to the anticipation of which way we were heading. This is my fifth I think and everyone has been very different. For the last couple of years No1 has tagged along with me but this year he's was striking out on his own....well with his mates.

It was absolutely lashing down in Minehead when we packed the car and headed up to the start at Wheddon Cross. As we got higher it got drier and even the sun was threatening to emerge when we got shepherded into the livestock market car park. 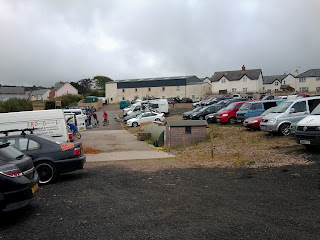 We parked up and met up with No1's mates and made our way to the registration marquee which was on the playing field. The organisers e-mail and text you your number so a quick verification and we had our tag to zip tie to the bike. No fancy timing chips, everyone starts at the same time and you are checked through checkpoints along the route then scanned in when you finish to give you a time.

Mass start, five hundred bikers through a ten foot gate isn't ideal and I managed to get ushered through a side gate much to my amusement. No1 was most amused too when he passed me wondering how the old fella had a jump on him. On the road for the first bit to Dunkery gate, a road I've done a few times on the road bike but I paced myself up. I stopped at the gate before I headed off road because it was warming up nicely and I was boiling in the bag!

Off road and up the rocky path up and over Dunkery hill. The only problem was the mixed ability of riders and a narrow track. I took it steady and overtook when the track was clear and always gave the rider I was passing a shout, a shame some people don't feel the need to. The route then headed over the moors on the boggiest, wettest track I've ever ridden. A shame really because if the weather hadn't been so crap lately it would of made for an excellent ride. I was struggling spinning out in the boggy mud, my own fault for buying summer tyres ! One poor bloke went flying over the bars when his front wheel disappeared into a hole, good job it was a soft landing if a tad wet. I checked he was ok and he was all smiles and jumped straight back on his bike.

After a short road bit and a nice ride along the top of the moor offering great views it was downhill from the top of Porlock hill down to Hawcombe. This was a great rocky descent that led to a steep uphill bit followed by a sweet singletrack descent down to Hawcombe. The next bit wasn't so sweet and the climb up to Ley Hill turned into a muddy trudge for me and a few others. It was nice having a morning stroll with like minded others though. Up and over the hill and some welcome jelly babies at the checkpoint and then the downhill to the tea stop at the farm in Horner.

No1 was already there but soon shot off and I got myself a lovely cup of coffee and some flapjack and cake and sat down and relaxed. The tea stop was at about the sixteen mile mark which meant there was about eight or nine miles to the finish. After refuelling, the route headed up Horner Combe, criss crossing the river on the way up. I nearly had a couple of offs on the river crossings but managed to stay upright, I should of worn wellies ! The route emerged from the woods and joined the road at Cloutsham ford which I rode a couple of weeks ago on the road bike. A steady spin up the road and I was quite chuffed I was passing people walking who had passed me on the lower flatter bits. After levelling off the road ramps up again, I got half way but ran out of legs, chuffed I'd got so far. Back on the moor and you could see Wheddon Cross in the distance, not far to go now. A rocky descent off Dunkery and then a quick and slippy descent down to Luckwell Bridge. The route was meant to go along some bridleways to the finish but the organisers had to re route because it was too muddy. So it was up the road out of Luckwell Bridge and a quick road blast back to the finish. No1 was already there but only just ! An overall time of 5:07 for me and No1 finished at 4:51.

Another great event as always it was just a shame about the mud but it all adds to the fun but the rain stayed away all day. The organisers and everyone who helps all give up their free time up to and during the event do a great job every year, thank you.


My Garmin for some reason missed mapping the first few miles but recorded the stats ?? Must of been all the others vying for satellite signals ??
Anyway here's my Strava bit for most of the route. http://app.strava.com/rides/16702773
Posted by Chunky Mamil at 20:50