I fancied a change from the road bike and decided to go for an off road blast. I dressed in my official mountain bike rider attire of baggy shorts, t-shirt and chunky shoes. I was heading out alone and I wasn't too sure where to go but at the eleventh hour I got a text from Bonus who was up for a ride. We hatched a plan to head up to the Hopcott ridge and then head off into Dunster Woods and explore the trails. This meant heading up the Hopcott road, a steep tarmac stretch that certainly warms you up. According to Strava its got an average gradient of 10% up to the tree line.Being on the mountain bike adds to the challenge, you can feel the tyres sticking to the road.
Once up onto the ridge we headed to the descent of Grabbist Hill, Bonus flew down but I took it steady. I'm still getting used to riding a hardtail again so you have to be a bit more careful with line choice. We then headed past the tall trees and in the spirit of adventure headed up a trail we had never ridden before. We ended up back where we started but it was a good loop and one we'll have to add to our future rides.
We then headed past the bear and onto the crunchy track which is one of our fave downhill bits. The rhododendrons were hanging over the track which slowed us a bit, not a lot but a bit.
We headed back towards Grabbist and went looking for a new route back up the hill. Bonus thought he knew the way, we found one and it was steep but we rode it. We were quite pleased with ourselves when we thought we'd got to the top. We were not at the top, decision time, steep push up or ride back down ? We pushed up the steep track, its that steep you have difficulty standing upright, I did think Bonus was going to cry at one point but he said it was something in his eye. We stopped at the bench to refuel then decided to hit the new track I discovered last time out this way back down the hill.
Its really peaceful up here, no traffic, no noise and we could look down at the busy A39, beats sitting in a car any day. 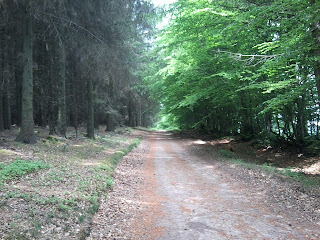 We blasted down the track, which really is good, and linked up with another track which took us down to Alcombe Combe. Through the trees and a splash across the river. We were going to stop for a photo opportunity but Bonus noticed a couple in the trees, must of been birdwatching or something ! We had a little chuckle too when we reached the pub in Alcombe. It was having a delivery and the dray lorry was blocking the road. An irate woman motorist was berating the delivery blokes for blocking the road and causing a tail back, must of been at least four cars and two cyclists.
No stats today, I've stopped recording my mountain bike rides. I just want to go out and enjoy the ride and not get hung up too much about how fast, far etc. Bonus did record the route on Strava just in case though :)
Posted by Chunky Mamil at 17:03