I'm going to start with a moan, a rant, a point of view call it what you will. Today's ride started with a short journey along the A39 to get to Carhampton. I try to avoid this road if I can but some days you need to go somewhere different. Perhaps I was being over protective as I was out riding with my first born but some people really do need to sit back and think. To go past cyclists at speed without even moving over is just downright bloody stupid, are we really holding you up that much ? Word of advice, if you are going to drive like an idiot don't do it in a van which tells everyone where you are from but whoever wasn't the only one. Just to reaffirm the impatient nature of people today a driver did a U-turn because he couldn't wait for two minutes for the steam train to leave Blue Anchor station, it made us laugh and calmed me down.
Anyway enough of that, soapbox back in the cupboard lets get back to the ride. This mornings ride turned into this afternoons ride as No1 was held up at school. He's on study leave now which means he can officially bunk off after any exams or lessons he needs to do. I was a little bit grumpy, I was ready to roll this morning and didn't know if to eat anything again. It had warmed up to but I really shouldn't moan about that ! After the A39 we did the lumpy bits to Watchet and through Williton and got onto the quiet lanes to take us to today's challenge, Elworthy Hill. We passed Combe Sydenham hall which No1 decided was haunted, because it looks like it is !
I'd attempted the climb of this hill twice before and failed miserably but today I was determined to get up it.  No1 set off and soon disappeared into the distance and left me to huff and puff on my own, I sat up and span and dug in. Its steep at the bottom but the gradient eases off a little bit, I tried to control my breathing and kept turning the pedals and slowly but surely I neared the top. No1 had stopped near the top and was waiting, I don't think he was out of breath or even sweating. I span past, determined not to stop until I crested the top. I stopped wanting No1 to take a pic of my glorious moment but he shot off as he didn't hear me in the stronger than advertised wind. I took a pic though.. 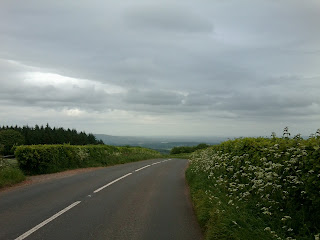 It was blowy up top and I was doing my domestique duties again sheltering No1 from the wind, bless him. I'm used to riding on my own so don't really mind, No1 doesn't like the wind, it tends to hold him up. We made our way towards Wheddon Cross but had to take a diversion because of water works down at the cross on a new road for us. What a blast, I think we just found our new favourite downhill though some of the bends were a tad sketchy. That could of been down to me going to a little bit too quick around one of them though :) We eventually arrived at Timberscombe with numb feet and hands, I think through gripping too hard and hanging on. It was nice to be back down in the warmth and out of the wind and we cracked on to Dunster and onto home. I was knackered now and could feel my exertions in my legs but got my arse out of the saddle on the last little climb.


Home and happy its amazing what a positive attitude can do for you but No1 did say he didn't think it was much of a hill !