Its been a while since I ventured out with No1 son. The pressure of exams, leaving or staying on and growing up both physically and in personality make for a tired teenager. He'd lost his mojo for a while but with the sun shining and some of his mates wanting to go cycling he wanted to get back into the groove. We just did a couple of short laps over the last two nights after school. Mainly short because yesterday I'd only had about four hours sleep after a night shift so I was tired and a little grumpy. I can't stay in bed all day especially if this is the only week of summer.

We set off up our new way on the back road to Dunster, he left me behind on any incline and on the straight to Timberscombe. He's one of those annoying people who make cycling look effortless whereas I sound like Ivor the Engine. We did the Wootton Courtenay lap and I left him behind on the straight before home, I think gravity helps me sometimes.
Tonight we did about the same first half of last nights ride but went for a ride through Luccombe and Horner to add some miles and a few lumpy bits. No1 sat behind me on the straight to Timberscombe and commented what a joy it was drafting behind me. It was about half way through this ride I noticed how low he was sitting. We haven't checked his ride height since before christmas and he must of sprouted about a foot ! He said he'd put on a stone but who knows where he's still annoyingly thin. Slight adjustment and we were off again, him looking even more effortless now.
We spun through Allerford and hit the road home, No1 tucked in behind me, if its flat I can push it a bit. He left me behind on the Tivington hilly bit but I caught him on the straight. 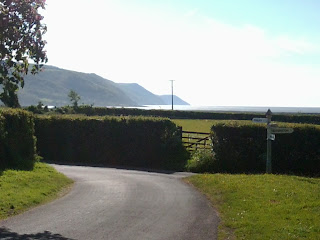 Two really good rides, I really enjoy watching the son ride it really lifts him and I wish he would do it more. He's got a big couple of years in front of him and starts his apprenticeship in July, two days after leaving school ! I'll keep on at him to keep coming out on rides and I will get him out on some club runs. We've got the Exmoor Explorer in August which we've done together twice before so roll on summer.