Before I start waffling about today's ride you might have noticed the JustGiving link on the blog page. I intend to do a few events this year and thought I'd try and raise a bit of money for charity at the same time. I've decided to raise money for the Retired Greyhound Trust as its close to my heart. They do great work rehoming the cast off's from the racing industry, I've got a cast off, sent for rehoming at eighteen months, that was five years ago and she's a real sweetheart. If you can spare anything it would be really appreciated, thank you. 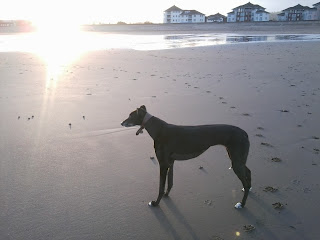 Just a quick spin today, I was still feeling the effects of doing that little bit extra on Sunday and wanted to keep the legs turning. The lactic acid was already there when I set off towards Porlock but once I'd done Bratton Straight I was spinning along quite nicely. It was sunny as I left home but as I spun along the wind was blowing a bank of fog towards me slowly enveloping the hills.
So it was down to Bossington and through Allerford now shrouded in fog and back onto the road to Minehead. Every time I go out now I seem to be pushing bigger gears, regular riding is really making a difference and its only a couple of months before I attempt my first Sportive of the year, sixty five miles around Exmoor, so I need the miles.

Back up the road, spinning up the hill at Tivington (I still need to work on getting up hills quicker) and head down on the drops along the straight and a lap of Minehead. The fog was touching the tops of the hills above Minehead as I rode along the seafront, thankfully matching t-shirt free and quite peaceful. 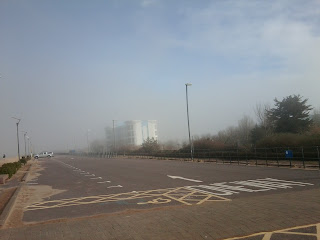 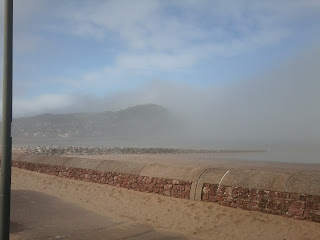 It was quite a good little spin, those endorphins are great and after temporarily stepping off the wagon last night I felt quite good, Cycling Plus did say red wine was good for you though and the cycling fairy said it was medicinal to ;)

Stick me down for £5 for the Greyhounds Trust please - just let me know when you want it.