Snow ? We hardly see it round these parts and I woke this morning to see the sun, yes the big orange thing in the sky, rising somewhere to the east. I was up early so took the hound out to count squirrels and check the road and weather conditions. The roads were a bit damp and probably somewhat salty after the last few days temperatures so I decided it was a definitely a day for the mountain bike. I hadn't ridden off road since my brush with tarmac back in December. The pyhsio suggested I should stick to the road and not jar the shoulder too much, I don't think he's ridden a bike on the roads around here :)

After some well needed lubrication to the bikes No1 and I set off, it felt strange sitting up riding the big old mtb, both our bikes are a bit heavy compared to our road bikes and the chunky tyres stick to the road, we both ride full suspension bikes and all your effort seems to disappear into the suspension when you ride on the road. Its a mile long uphill road slog to the woods and I could see No1 was struggling as much as me, its not very often he stops for a breather and I pass him going uphill. 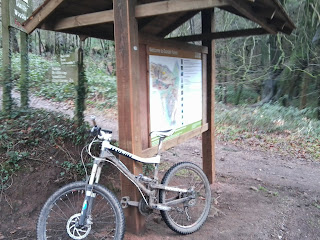 After a quick breather we were on the rough stuff and the bike felt so much better. I wasn't feeling too bad either as we spun our way further up to the top of the hill, No1 was still struggling though, a combination of tiredness, his bike getting too small for him and just a general teenage strop were not helping his mood. He even sat on my wheel as we rode another uphill section. We were only a couple of miles from home but the elevation made a great difference in temperature. On the top the track was frozen and scattered with remnants of snow and icy puddles, and being a big kid it was great fun smashing through the puddles, even No1 joined in which cheered him up.

I didn't want to do anything too technical today as the shoulder still isn't in full working order. We did a quick circuit around the fire roads getting wet and muddy but riding at a good pace overall. Its great to ride off road without having to worry about looking over your shoulder for cars etc and I enjoy the tranquillity of riding in the forests. No1 didn't fancy riding much further so we headed down one of our fave downhills into Alcombe Combe but this was somewhat curtailed half way down by twenty plus multi coloured mountain bikers riding up the same track. At the bottom we slipped and slid through a little track in the trees, I was quite pleased to stay upright chuffed that I still had some bike handling skills. We then headed home, we were only out for about an hour, but I enjoyed it I just hope I haven't lost No1 to the dark side, he'll be better once the trails dry up a bit. 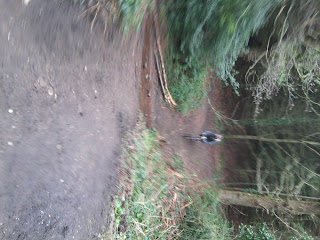 The pic above was meant to be a picture of me looking dangerous and exciting riding through a stream but the boy took it too early, oh well another time maybe ;)