I was a bit down this morning, speaking to my dad last night set my mind racing which led to little sleep. He's fine, a stubborn old boy who'll no doubt go on a lot longer. He's sorting things out before the inevitable, it's not something I like to think about after losing my mum two years ago but I guess it's something I'll have to deal with. He always makes light of it, preparing for his bonfire as he likes to call it, he always tells me not to worry but I guess I'm the worrying type. He also tells me to get out and enjoy myself, so I did.

I've had a bit of an urge to ride new routes lately especially on the mountain bike, explore the fantastic surroundings of where I live even more. The aim for today was to head for Dunkery Beacon, I know where it is but how to get there off road was a different matter. I scanned the map and headed off, up the hill and over the ridge and down to Wootton Courtenay, some of the woodland was a bit more ancient today.

Once off the tarmac the tracks were a bit more interesting today, green lanes I think they like to call them but muddy and rocky was the theme today. As I got closer to Dunkery the cloud started to shroud my surroundings and the track I was on turned into a great big field. I had ridden this way on the Explorer once but I still had the overwhelming feeling of being lost, but I didn't cry. I couldn't ride across the field it was that wet and just sunk but I finally found the edge and signs, signs are great. 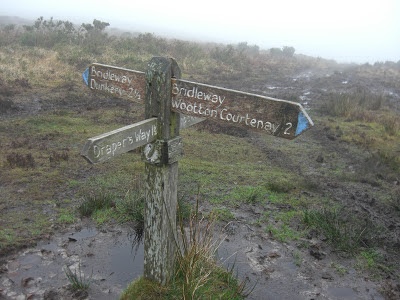 Up I went into the murk, and up and a bit more, the visibility wasn't very far but I finally made it to the road that goes over Dunkery, nearly at the top of it, I wasn't expecting to be quite here. Instead of riding up and down the same track I went down the road and up the track to the beacon. A rocky ascent and it felt farther than it looks when I've seen it on a good day but I got up it. 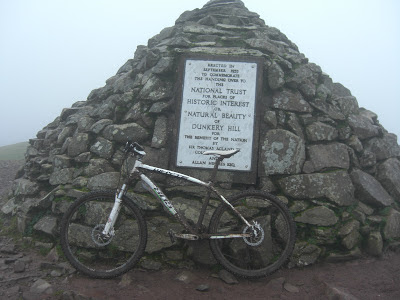 Downhill now for about two miles, a technical rocky descent which needs full concentration, glad my bike as ample clearance for precious bits ! I've ridden this bit on my full suspension bike but never on a hardtail bike so line choice was important. Once heading down the hill the cloud lifted though which made the views a bit better :)


Just a last hill to negotiate before heading down to home, there are easier ways to get back but where's the fun in that ? It's been titled "killer hill" on strava, just over a mile at an average gradient of 9%, see I said it was fun. Still couldn't quite make it in one go, the legs were willing but my back needed a quick break. After that, straight back down to home, great ride.

A great post on what sounds like a super ride..glad you enjoyed it and thanks for sharing the photos...