I can't quite remember when eldest first started to come riding with me, he's nearly seventeen now and has been riding something ever since he was able to. He started off by whizzing around the bmx track on his 16"Action Man bike and progressed up through wheel sizes as he grew. I think his first off road ride was up North Hill and straight back down the zig zag tracks to the harbour. I always remember his smile that day, he absolutely loved it and never looked back. Over the years we've gone from me pushing two bikes up hills to him riding up almost anything and leaving me behind but at least even I do a lot less pushing these days.

We haven't been out for a good off road blast on our own for ages, one of the lads he works with likes to ride so he's been hitting the trails with people more of his own age. Eldest had a plan for a route but that was before he slept so his epic ride wasn't quite so epic but still good fun. A blast along the bike path to Carhampton and apparently I was going too quick ! I need to chill apparently ? Eldest told me he'd put on half a stone recently so I think that was his excuse for me leaving him behind. First hill of the day and again I was in the wrong for not stopping to have a breather, this is a hill I used to push up, but not any more.

Some of this ascent was proving tricky with all the leaves, mud and slippery rocks making it hard work on the steeper bits but eldest disappeared up it with relative ease. A spin along the top and a stop to admire the stunning views all around us and the autumn colours in the trees. I'm really lucky to live here, I don't think some people who live around here really appreciate the beauty around them. 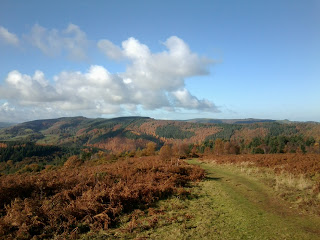 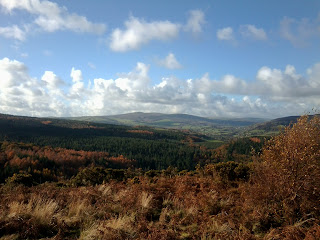 A quick wet and rocky descent to Dunster and then the ascent of Grabbist hill which again needed a degree of concentration due to boggy bits, wet roots and rocks. There is a steep climb at the end which we've both managed to ride up in the past but not today. It was hard to get traction in the mulch and we just kept spinning out so resorted to a push up, just like the old days ;) 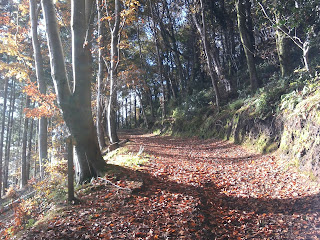 Along the ridge of Knowle hill, with it being exposed and a bit on the sandy side it tends not to get too boggy so progress was easier, spinning along in the sunshine. A stop to chat to a nice man on a motor bike who was lost and then the descent back down to the road at Bratton. There is a myriad of tracks on the hill and you seem to find new ones or old ones you haven't ridden for years which we did today. It was a leafy, boggy, slippery descent which eldest described later as technical which means you spent most of it going down sideways which was great fun. Back to the road and a blast home along the straight, I quite like this Sunday off lark, lie in, coffee and read the newspapers, go ride a bike with your son and get muddy, happy days. 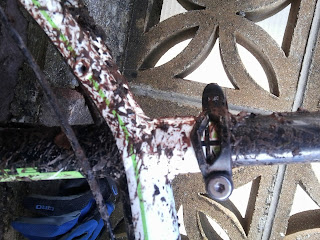