Its strange how the mind betrays the body sometimes. I've felt decidedly crap for the last couple of days, did  I over do it the week before, have night shifts finally caught up with me, who knows. Up early to avoid the heat and I still felt fuggy but I was determined to get out and ride. With school holidays now in full swing the roads were quiet, no school run mums taking no prisoners, I've had first hand experience, they stop for no one.

It was blue and hazy and already warm as I headed up the back road to Dunster. A new climb today, a road I rode down with No1 a few weeks backs. Its also the last big descent of the Exmoor Beast so if anyone's done that you'll know it. Its about three and half miles and I think its a bit steeper than going the main road way and it finishes above Wheddon Cross so you gain more height too. It starts nice and sheltered out the back of Timberscombe, granny ring engaged, it was a bit steep for me but I kept spinning. Its one of those climbs that plateaus then rises again and even throws in a short downhill bit. I was feeling good though, just spinning in the sunshine determined not to stop. When I first started doing the road riding I think I had that little bad mamil on my shoulder telling me stop because I was knackered and couldn't do it. The more I ride though I think a good mamil has appeared on the other shoulder telling me to keep going and pushing me to get to the top. I also think I ride on my own too much ;)

Anyway I did get to the top of the hill without stopping and carried on down the quick road along the top towards Dulverton. At one point I even had a tractor drafting behind me as I was going too quick for him to overtake but he left me on a hilly bit, always the same old story. Back up to Wheddon Cross along the valley road the River Exe flowing below me. It was bordering on chilly, I've always said that Dulverton has its own micro climate and the sudden chill just reaffirmed that belief. The road through Bridgetown has been resurfaced which was nice but its still as rough as a badgers posterior either side. My plan was to get to Wheddon Cross and see how I felt, easy way down or ride over Dunkery. I was still spinning along quite happily so stopped for a can of something fizzy and then headed towards Dunkery.

Dunkery is starting to get the hint of purple which means the heather will be blooming soon so I will have to head this way again. I don't know if it was the sugar rush but I seemed to make quite good progress up the road to Dunkery. I didn't reach for the granny gear as I was feeling quite strong which is a first for me. Its a nice climb up the road and the views are just brilliant and make the effort worthwhile. I stopped to take a few pics as some Exmoor ponies were also up here. I keep running into them, we both know all the best spots :) 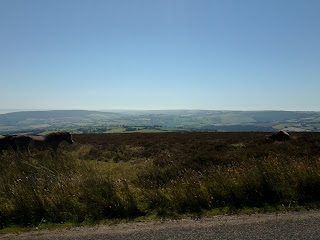 It was then the descent off the hill and then down Crook Horn Hill which is just as steep going down as it is going up ;) A quick blast through Luccombe and back to the main road and home. I felt a whole load better when I'd finished then I did when I started. Feeling good on the bike again and I keep looking for hills to ride which is a bit of a worry !

Here's a bit of a tune, not everyone's thing but I think its quite beautiful.