I was determined to go out for a ride today irrelevant of what was happening in the skies. After a early morning conditions recce with the hound things were not too bad. No wind, no rain but muggy and overcast. I didn't fancy a road ride in case it lashed down and opted to go for a blast on the mountain bike. After the levels on Sunday the only way was up today, my legs were feeling a little bit achy but soon warmed up.

It was a muddy well worn trail up the slopes of North Hill. My new "Summer Tyre" was struggling in the mud  under the trees and I spun out on a couple of occasions. As ever the track dried out once out of the trees and the channel to my right looked like a massive mill pond in the still conditions. I startled a couple of walkers once on top of the hill, sounding my bell as I approached. I know a bell isn't macho hardcore mountain biker but it certainly breaks the ice when approaching walkers. As I got towards the end of the hill I could see the cloud and mist rolling in, I made my way down to the Acland Hut for a quick breather. 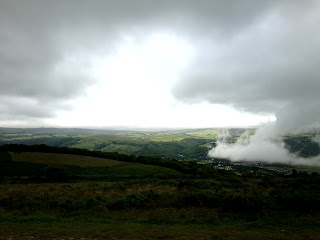 The hut was built in memory of one of the Acland family who owned the Holnicote Estate which is now part of the National Trust. Apparently he would walk up here every Sunday with his family, I don't blame him, it's a nice spot. 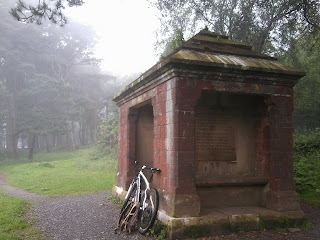 As I set off to head through the misty Selworthy woods I came across some of the locals hiding in the trees. 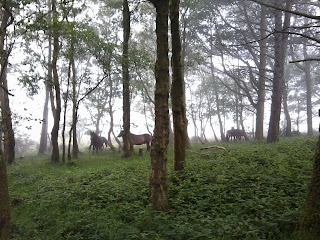 There's a myriad of tracks down through the woods to the village of Selworthy. A couple were blocked with fallen branches but I saw them in good time so avoided any dodgy moments. There was a fair degree of foliage  along the tracks, must be all this damp weather. After the village I made my way along the back lanes and tracks and headed up to Periton woods. This climb starts out as a wide forest road and turns into a track further up. It used to be a major effort for me involving pushing half of it but last time out this way I made it stopping for a breather about half way. Today though I hadn't stopped since Selworthy and was feeling good and just kept going all the way to the trig point at the top of the hill. Another milestone moment for me, I'm not the quickest but I think my endurance is improving all the time. Then it was all downhill to home, fun fun fun. 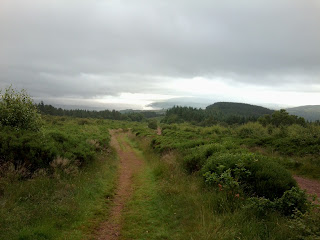 It was trying to rain as I pedalled along the road to home and I made it in just before the heavens opened. I felt really good today and was so pleased with the way I rode especially the ups. Perhaps having to pedal for fifty miles on Sunday did me some good ?
Posted by Chunky Mamil at 14:59