After a quick weather recce with the dog, things down at sea level were looking quite pleasant. As I was riding up to the moors today I layered up and stuffed my Gilet in my back pocket just in case, I even wore my free buff from Cycling Plus, I was prepared like a proper boy scout today or so I thought. So I got Lance out of the shed (my Trek) headed off towards Porlock along the undulations of Bratton straight then down the Tivington hilly bit passing what seemed to be most of my extended family going in the other direction, don't know if any of them recognised the lycra clad grockel, I was going too quick to wave. I was heading for Porlock Hill but was taking the relative easy way up via the Toll Road. There are two toll roads the New road and the Worthy, avoid the latter it wouldn't be out of place in Beirut, the pot holes are more like craters, it's a bit scary going down it. 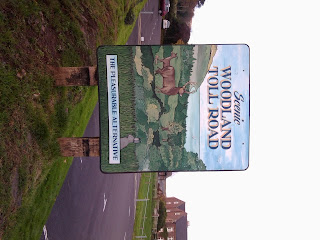 Its about four miles up the toll road, starting at about 100ft above sea level rising to about 1300ft at the top. Its a long steady peaceful climb, just pick a comfy gear and tap out a steady rhythm with just the sound of me wheezing and what must be hundreds of squirrels going mad in the undergrowth looking for their nuts. I was determined to enjoy my ride today and not get too hung up on speed and stats and all that nonsense. A huge Buzzard swooped low in front of me and landed in a tree, I tried to get a pic but the sound of me clipping out scared him off, he did look like he was sizing me up for breakfast though, he'll probably wait for me at the top when I'm knackered :) 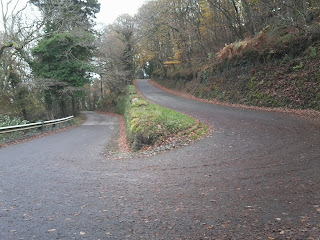 I think the hill sheltered me as I made my way, I was enjoying myself spinning up the hill, you don't get many cars this time of year its mainly a tourist route and you have to pay. So I got to the top and made a slight off road detour. If  you stick to the road you have to double back on yourself and have to climb back up for a mile or so. I tried a track my nephew told me about well its probably rideable in the summer and some attempt has been made to surface it but its not summer, after a quick negotiation of several water filled craters I got back to the road. Note to self, stick to the road, ride the hills you wimp.

It was bleak up here and the wind found me. It was now an up and down toil into a headwind for four miles along the top of the moor. It was a good job I packed that Gilet. The elements started to take their toll, I started to lose feeling in my toes but I gritted my teeth and carried on I even managed to cycle out of the dip at Dunkery Hill, its short but bloody steep and the other times I've ridden this route I've always bailed out. 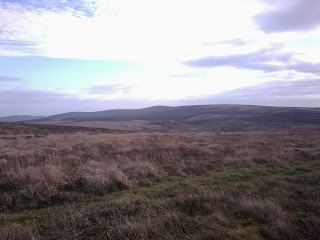 It was then the downhill into Exford, its a fast descent with a couple of bends thrown in for enjoyment, but I was bloody freezing, now I know why those squirrels were so mad ;) I had to stop in Exford to try and regain some feeling in my toes and take on some fuel. It was then another climb out of Exford, I've ridden up this hill before and always got up it but today I bailed out, I don't know why I was only about five yards from the top. Maybe it was the cold taking its toll and last time I had No1 to act as the hare. I need some more ride buddies, Lance doesn't say much. It was then along to Luckwell Bridge another fast descent with a little climb back out and onto Wheddon Cross. Things were brightening up mentally now I as knew it was basically all downhill for the ten miles back to home. Its a cracking run down from Wheddon Cross, I've ridden up this way enough times lately it was time to enjoy going down it.
It was time spin the big ring home, no more hills, I know I wasn't going prattle on about stats but I managed the last ten miles in about thirty five minutes, but hitting 30mph for about two miles down from Wheddon Cross probably helped a bit.
Distance - 29.6 miles
Time - 2.50
Avg speed - 10.5mph
Elevation gain -3133ft

Dear Santa please can I have some cosy overshoes for crimbo :)

I thought that was you. Didn't recognize you til too late though.