A Sunday off and a chance to go and ride somewhere new, a trip to Exmouth to do the Jurassic Classic charity ride, it's a Prostate cancer ride so all money raised goes to a worthwhile cause. I say charity ride but your sent a number with a timing chip and there's three choices of route and the shiny bikes being assembled in the car park(rugby pitch) all say sportive. The wife and youngest child came along for the day out and shopping, the wife being most amused by the man stood in front of the car applying his chamois cream a bit too enthusiastically! Claud the Butler was there who apparently serves a damn fine cup of coffee but I didn't partake, don't get the whole coffee or wine thing, all tastes the same to me, perhaps my taste buds are too uneducated ;)

The organisers were keen to get all the 100 miler riders away first so I hovered until the 100k riders were called and made my way to the start pen so I could get away in the first wave. After the usual briefing we set off along to the quiet seafront, the cloud was starting to lift and it was looking like it was going to be a beautiful day. When I did the Exmoor Beast last year I remember staring at a big plastic poppy on a bike for several damp miles on the moors. I was now staring at a plastic poppy again so I asked the rider if he'd done the beast and he had, small world. Quite steady for the first few miles, I commented to another rider how nice it was who replied we hadn't done the big hills yet and told me about what was in store but it wasn't as bad as he made out. A short sharp climb to above Sidmouth and then a very quick descent down to the seafront which was also quiet early on a Sunday so no Grockel dodging was needed. Once out of Sidmouth it was the big climb of the day up Sidbury Hill, quite a gentle climb really about two miles or so then some nice flat for a couple of miles before descending into Honiton. An awkward turn on the high street, hill, cleats, traffic lights so I got off and nipped along the path, I could just see a clipless pedal incident in my head.

First feed stop at Gittisham of the village hall variety, proper toilets, tea and coffee and a wide choice of sweet and savoury snacks, High5 gels and drink, I stuck with the usual banana and malt loaf but couldn't resist a chocolate brioche. A little climb away from the village then it was undulating leafy lanes for the next twenty odd miles. If it wasn't for the excellent signs around the course I would have thought I was alone as I felt alone for a good few miles. A bit of nice new road for a bit and a ride past the airport, I tried hanging on to some quicker groups but to no avail. As I approached the second feed stop the legs started going a bit, think I'd been trying to push too big a gear at times and the deceiving incline to the stop in Aylesbeare caught me out a bit, serves me right, cadence, cadence, cadence! Even more choice at the second stop, this was also the stop for the riders doing the 50km so lots of people about. Flapjack, I had to have some and a Almond finger and the cake looked nice but I refrained and just had a gel.

Twelve or so miles to go and the home stretch, one last little climb, well the organisers did say it was all downhill to the finish so you have to start on the top of something. Great views to the coast from the top of wherever I was and a quick descent back to Exmouth. My only criticism of the whole event comes at this point. Half way down this quick descent now with riders of all abilities you had to go across a busy road going across traffic, a marshal would of been good at this point. Still a nice descent  but back into the traffic in Exmouth before finishing back at the rugby club. A medal, bottle of water and sachet of something and a pasty but it was the last thing I fancied at that moment though plenty of other riders were tucking in.

A good ride really, not as hilly as it was made out to be, Cheddar Sportive and a 100 miles next, that may hurt :/ 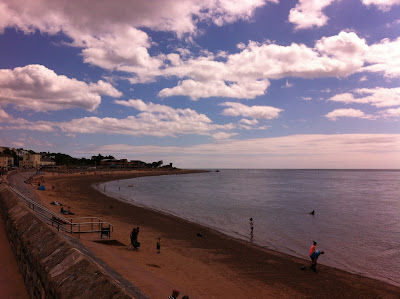