I started my fortnight off riding the valleys of South Wales in the blazing sun and finished it riding around Dartmoor in driving wind and rain. I made a weekend of this one though taking 'er indoors and youngest child off to a quiet retreat for a couple of days. I spent most of the weekend checking weather apps in the faint hope the weather guessers were wrong but no, a fitful nights sleeps accompanied by the sound of rain and wind confirmed the forecast. Up early and off to Newton Abbot racecourse to join the assembled masses, not too bad but the clouds looked ominous. I'd registered the day before and affixed numbers etc. so it just a case of getting ready, which layers? oh yeah all of them ;). 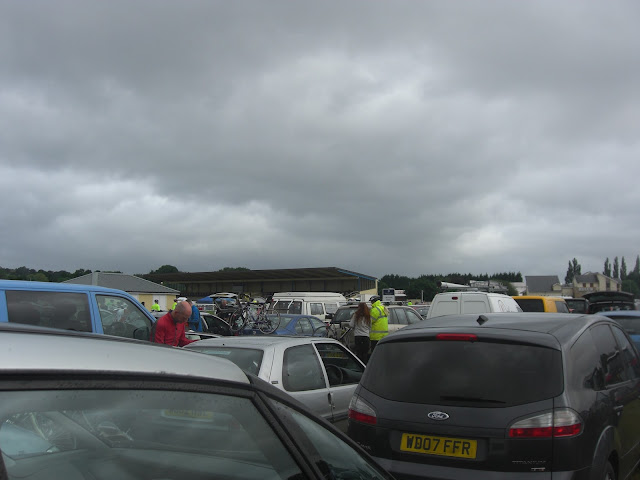 So just before eight I set off into the unknown, with quite a mix of riders, a group of school kids, mamils of all sizes and lots of ladies. The first six or so miles is just a steady spin but its not long before you start going up which you don't seem to stop doing for the next ten miles. Once on the moors you were greeted by the wind and rain but the Tors still looked fantastic in the misty haze. I did think about stopping to take pics but I was cold and thought the best policy was to keep moving. I don't really know where I was, there was some downhill but mainly uphill, some hills quite short and steep and one bit quite rural but I managed to get up them all, slowly but surely. The drag into the headwind up to Princetown was hard work and seemed to take forever a bit like most of the first half of the ride but I finally made it to the feed station. The place was very busy, lots of people in foil blankets looking cold, I didn't hang about, flapjack, banana and fill the bottle and I was off again into the gloom.

The second half of the ride was a complete contrast to the first, the hills were a bit more rolling the wind was at your back with just a longish climb towards the end at about fifty miles. The Medio route was advertised with about 6000ft of ascent, I think that was all in the first half of the ride! A great descent down under the trees along the Teign valley and then it was pretty flat all the way to the finish. I even managed to tag myself to the back of a group for a bit and got towed along for a couple of miles. Just doing that cheered me no end as it shows I've managed to get that little bit quicker, not much but a bit. The last bit of the route went around the houses a bit but I think that was to ensure we were kept away from the traffic and the finish into the racecourse was well set out.

The second half of the ride made up for the first half but I'm sure if the weather had been better it may of been different. I don't think I've done an event so well marshaled, people on nearly every junction always with a word of encouragement. I chucked the bike in the car and went to get my goody bag, nice to get bike related stuff beats toothpaste and salt?