I had the privilege and the pleasure of being invited to the Cycling Mayor's birthday ride, a gathering of like minded individuals to celebrate and cycle in the spring(!) air. I left home in the drizzle, drove along the motorway in the dry and arrived in Swindon with light snow falling. Lycra clad strangers appeared in the car park and gathered in the hotel, greeted, mingled and applied layers. Originally a fifty mile loop south of Swindon but due to the wintry conditions route master Guy devised a slightly shorter but equally good route.

It was actually dry as a dozen or so of us set off through Royal Wootton Bassett and once on the move it was cold but I actually didn't feel too bad. An early puncture caused by one of of the numerous pot holes gave me a chance to get up the big hill of the day ahead of the pack and give me some respite as to be honest everyone else was a bit quick for me. We headed for Marlborough which meant passing through Avebury and a chance to see the megalithic stones and there was lots of them. A welcome stop with a warm welcome to warm up and replenish at the Church and craft centre in Marlborough, coffee and cake was very nice. 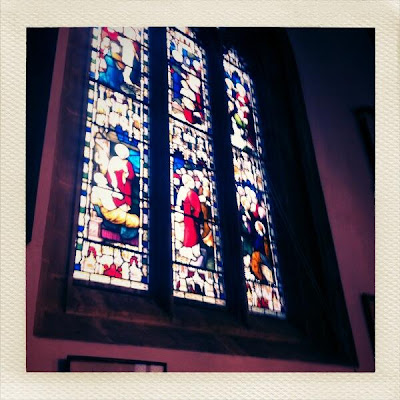 After the stop it was an undulating twenty or so miles back to Swindon, I was flagging a bit but I have to thank everyone for waiting for me especially Martyn, Chris and Pete for keeping me company, perhaps I need a testosterone injection, Lance might have some spare ;).

It stayed dry, it may have been cold but the company was great and we were all there for someone special.
Posted by Chunky Mamil at 20:56