Not done many miles on the road bike lately, I wouldn't say I'm a fair weather cyclist but snow, impassable roads followed by floods does put you off a bit. I went out on the mtb the other day which turned out to be very wet and found trails blocked by trees. 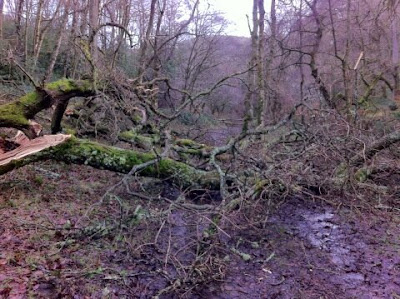 At least I still got views like this though. 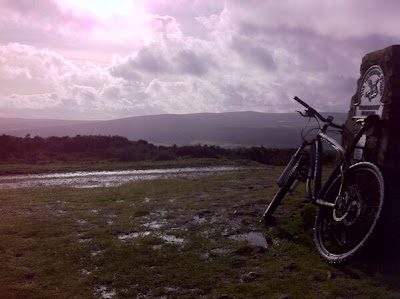 Today I was sort of invited to go for a ride with the Axbridge cycling group which meant a trip out to the Mendips. The group is made up of people I've got know through the blog, amongst others and I was slightly worried, new bike, new pedals, old me, and they are all far more accomplished cyclists than I. After meeting up with the Mayor(Jennifer) and the Rouleur(Guy) we made out way to the square and met up with Martyn who I met at the Cheddar sportive and two of his friends and  Dave and Mr Steep(Steve). Steve's shifter appeared to have broken on his way to meet up so he quickly left us to go home and sort things out and meet up with us later. Upon the bell ringing of the church we set off, heading for Cheddar Gorge which is apparently iconic, and the goats are sheep ? The signs did say road closed but that seemed to be being ignored by everyone, cyclists and motorists. As usual I had the feeling of going backwards as everyone else seemed to disappear into the distance. After a steep left hander things levelled off and Guy kindly towed me up to meet up with the others.

We continued along the top of the Mendips, slightly wet and the cloud seemed to be rolling in. We stopped at a junction to wait for Steve and right on cue through the mist he came over the hill. We were heading for Mells, which I thought was the proprietor of a cyclist friendly teashop and not a pretty Bath Stone village which it turned out to be. Martyn's friends left us at this point and the rest of us stopped at the Post office, shop, cafe for coffee and cake. After that it was back up to the Mendips which was even murkier than it was before we stopped for coffee. I was reliably informed you can see Exmoor on a good day, today wasn't a good day for views. After traversing some wet and muddy lanes which reminded me of West Somerset we got a bit strung out in the elements on the main road. Kindly everyone waited for me or towed me along as any incline had its usual affect on me. Guy and Steve went off in their own direction whilst I followed the rest back to Axbridge, at least we had a bit of downhill to finish.

It was a bit grey and miserable but had a thoroughly good ride with great company, fifty miles which is a bit longer than I usually do. I did feel good on the bike but a bit tired towards the end which was probably my own fault for not eating and relying on caffeine to get me round.