It was a day to hit the rough stuff, the weather was a bit iffy but you have to get out and ride. Bonus put off his hibernation and No1 came along for the ride. I wrapped up for the conditions wearing my new softshell from Mountain Warehouse, I always like their stuff, its cheap and functional and doesn't fall to bits. No1 wasn't impressed by my decision to wear my Ron Hill leggings "I thought we were going mountain biking" think he thought I was dressed too roadie ! He was wearing baggy shorts, proper mountain biker ;)

We set off from the house of Bonus and wound our way through the back roads of Minehead and onto the track that would take us up the slopes of North Hill. Its a regular route and a nice steady climb, a few years ago I'd be huffing and puffing and stopping every five minutes to catch my breath, I can now ride at a much better pace and don't even use my granny ring on this climb. Bonus seemed to be struggling a bit early on but I think he had been partying the night before, it was nice to have someone to chat to though as we made our way up the leafy track. Its sheltered this side of the hill and as we approached the top we could feel the wind whipping around the headland. After a quick breather we headed along the top into the head wind, it was a bit overcast but not too bad. As we made our way towards Selworthy Beacon the skies darkened, we stopped to add layers and made the decision to make a detour, then as we set off the heavens opened. I don't know if it was hailing or it was just the rain bouncing off the road because I couldn't see but we stopped and dived under a gorse bush to shelter and discuss route options. 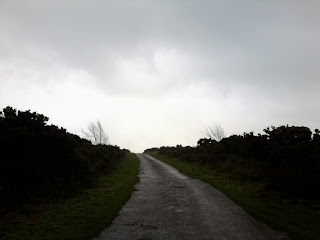 We decided to head back, No1 was looking a bit cold, he would wear shorts ! We still hit some good tracks on the way back and the sun came out as we crashed and splashed through the puddles. We made our way towards what is known locally as the "Tank Tracks" a relic of a world war 2 tank training area. Its more a case of dodging dog eggs rather than rocks on this part of the hill as its the dog toilet of Minehead. 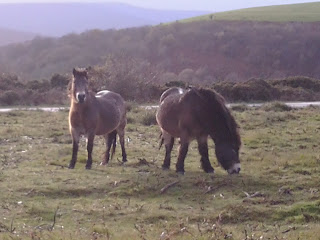 No1 was really feeling the effects of the elements now, he does tend to suffer with the cold but as all parents know, you can't tell them. After a quick downhill and blast around Jim's path we decided to take the road home and get No1 back into the warmth. It was wet, windy and cold but still good fun, you can't beat cycling around these parts.