I read an article today about a study which suggests people like living beside the seaside, it creates a sense of well being apparently. I must be lucky because whilst I can enjoy a stroll along the beach I can also head to the hills to enjoy the lovely countryside which surrounds me which also gives me a sense of well being and this is what I decided to do today and ride my bike which also makes me feel good and ignore the weather because being positive is also good for you. The wind was a bit gusty so I decided to ride the mountain bike and get muddy and go looking for new tracks to explore. I headed out to Alcombe woods and wound my way up through the combe and then onto the track I've often thought about riding up but never had, all roads basically head to one place so there was little chance of getting lost and I could always turn around.
Water was running down the track and it was narrow and rocky as it meandered its way up the wooded combe, it was peaceful now out of the wind, I do like being out in the woods some people find it eerie but not me I find it quite calming. The track got rockier and steeper and I had to push the last bit as I lost traction and skill to reach another track which followed the contour of the hill. Left or right ? Left, I had a rough idea where I was now and the track took me to the top of the hill at Hopcott and the ridge line which I regularly ride. I did my loop of the forest roads, not particularly technical or interesting but a good work out but littered with horse poo, line choice was critical, I even passed some other hardy souls out on their bikes. 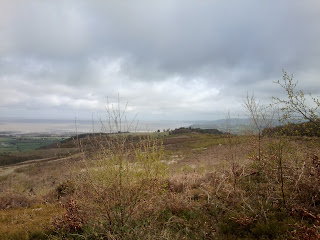 I decided to head back down the way I'd ridden up, far more fun, but carry on where I made the decision to turn earlier and see where the track took me. It was a nice piece of singletrack and a bit overgrown so not used much and it took me to another downhill stretch I knew which took me back to Alcombe. Muddy, sweaty and so happy to get out on my bike, it didn't rain and even the sun came out. 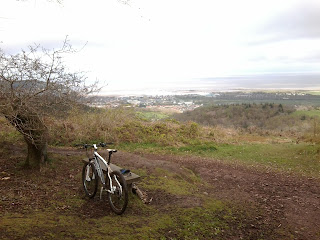